An essay by Douglas Hogg

The following essay has been written by Douglas Hogg. It can either be read as one paper, as shown below, or viewed in 10 parts, each with an illustrative image, map and artist biographies, in a format similar to the other entries on the website.

Douglas Hogg DA (Edin) FMGP FSA (Scot) studied Stained Glass with Drawing and Painting at the Edinburgh College of Art 1966-1972, becoming head of the Stained and Architectural Glass degree course there from 1979-2000. 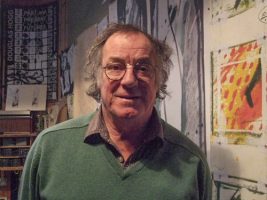 Commissioned works include a Staircase Wall Installation at the Edinburgh City Chambers and The Queen's Diamond Jubilee Window at the Queen's Chapel of the Savoy in Central London 2012. He was installed as a Freeman of the City of London in 2007 and in 2016 was given recognition by the Radcliffe Trust for his contribution to Glass in Architecture.

For further information see Douglas Hogg - the colours of Light and the Edinburgh College of Art - Transition Exhibition Catalogue PDF which also details the work of some of the students he influenced while teaching at the ECA.