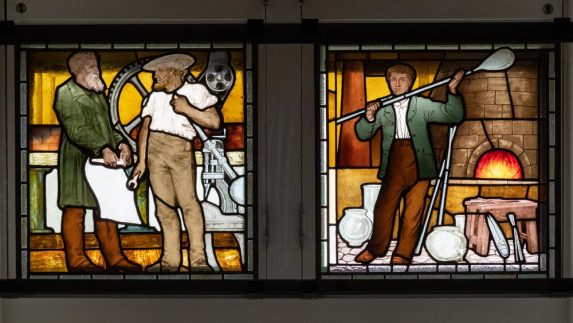 Zoom
Stephen Adam, The Engineers and The Glassblower (1878), part of a set of panels made for Maryhill Burgh Halls, Glasgow
Photo: Peter Hildebrand

Stephen Adam (1848-1910) was a major Figure in the field of nineteenth-century Scottish stained glass. Born and educated in Edinburgh his ability was spotted by the leading stained glass artist, James Ballantine. When his apprenticeship concluded in 1867 he moved with his parents to Glasgow where he was a student of the Haldane Academy (later to become Glasgow School of Art). Here his talents won another apprenticeship, this time with Daniel Cottier, who would have a considerable impact on Adam, helping him to form his distinctive style, as he later acknowledged.

Stephen Adam established his own studio at 121 Bath Street, Glasgow in 1870 and for the next four decades produced a prolific series of windows, fulfilling a full range of ecclesiastical, civic and domestic commissions and encompassing a wide variety of themes. He employed a series of gifted freelance artists to design for the studio, including Robert Burns, David Gauld, and Alex Walker, and was later joined by his son, Stephen Adam Junior, and the brilliant young artist, Alfred Webster, an ill-fated triangle as events would show.

Source: Always happy in his designs: the legacy of Stephen Adam by Iain B. Galbraith on the Victorian Web