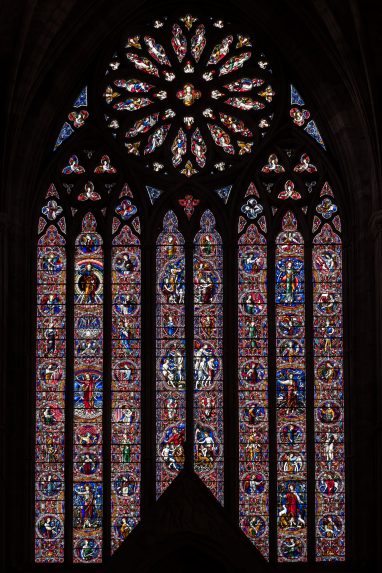 John Hardman & Co. was founded in 1838 to manufacture ecclesiastical metal work to the designs of AWN Pugin (1812-52), who encouraged the firm’s expansion into stained glass in 1845. Pugin acted as its chief designer until his death, when he was succeeded by his nephew John Hardman Powell.

John Hardman Powell (1827-95) a deeply religious Roman Catholic, was trained as an apprentice by Pugin. A rare privilege given Pugin’s reluctance to employ clerks or take on pupils. The Hardman firm continued to flourish under his leadership, due in part to the individual attention given to commissions and the originality of each design, a contrast to other firms that would often reuse designs numerous times.

Sources:
Hardman of Birmingham, Goldsmith and Glasspainter by Michael Fisher (Landmark Publishing, 2008)
The Stained Glass of John Hardman and Company under the leadership of John Hardman Powell from 1867 to 1895 by Mathé Shepheard, which can be downloaded as a 3 volume PDF