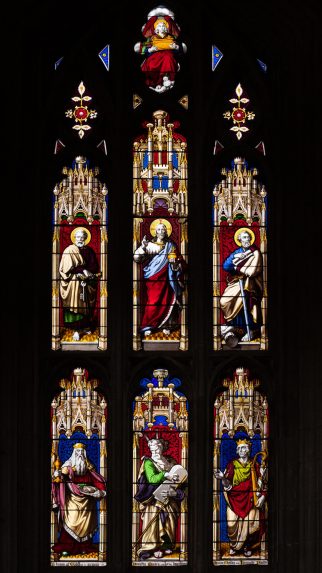 David Evans (1793-1861) was one of the most important artists associated with the revival of stained glass in the pre-Victorian age. He was born in Wales and apprenticed to John Betton in 1808. The two men went into partnership in 1815 as Betton & Evans.  Evans retained the name of the firm following the retirement of Betton in 1825. Despite changing fashions Evans retained a pictorial style, as demonstrated in one of his best windows, the east window of St Julian’s church, Shrewsbury, 1861. His sons William (1826-85) and Charles (1828-64) continued to make stained glass as Evans Brothers. The business eventually closed in the 1930s.