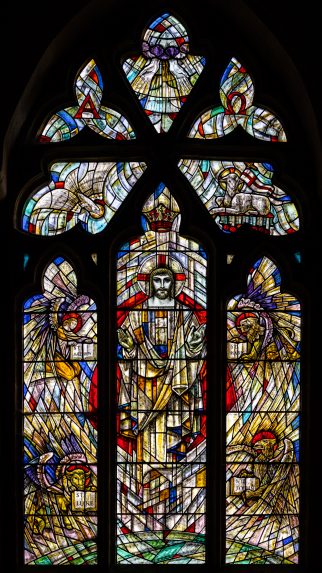 Roy Walter Coomber FMGP (1930-2016) had a wonderfully long and prolific career in stained glass, and his work can be found across the England and Wales and North America. It started at the age of 14 with Cox and Barnard Ltd in Hove, where he combined practical experience with night school classes in drawing and design at Brighton College of Art. In 1946 he moved to Barton, Kinder & Alderson (BKA), which had been established by former Cox & Barnard employees. In 1954, having completed his apprenticeship, he moved to Goddard & Gibbs in London, but the commute encouraged a return to Brighton, where in 1959 he rejoined BKA, now with the chance to design and paint.

In 1961 Roy Coomber moved to Devon and the studio of J. Wippell & Co. Ltd as resident cartoonist and designer, and where over the following 18 years he would design for projects in both the UK and the USA.

In 1979 he relocated to Bristol to become Studio Manager of John Hall Studios, which subsequently became James Clark & Eaton and then Solaglas. His final move came in 1988 when he established his own studio, building on the freelance designs and cartoons he had been producing for a number of American studios, but now adding painting and restoration, as well as encouraging the next generation of artists, such as Laura Gilroy AMGP and Eleanor Lachab. Two examples of Roy Coomber’s work in these years are shown opposite. Both are at the Church of St Mary the Virgin, Hartpury, Gloucestershire.

Roy Coomber and the Worshipful Company of Glaziers