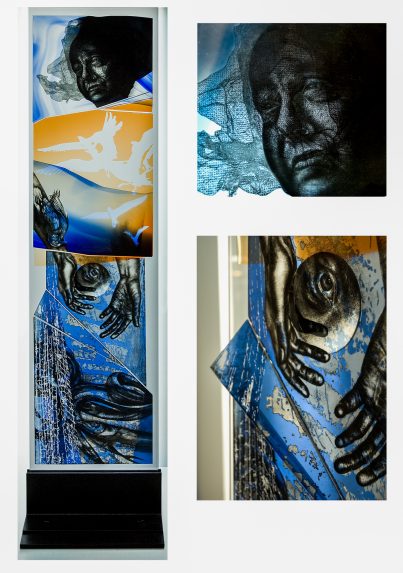 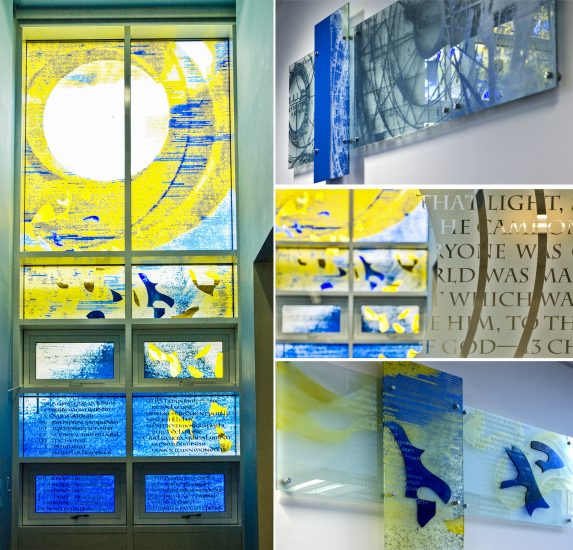 Fabrizia Bazzo is a self-taught architectural glass artist, who embarked on this new career at 40 after working for 23 years in the accounts department of a large industrial corporation in Italy.

In the 25 years since her move to England, she is still working with glass. During this time, many things have changed meaning there are fewer opportunities for glass artists to undertake public commissions and the change in the economics and architectural trends have not benefited the craft. Following a severe accident in 2018, Fabrizia was forced to change direction and moderate her ambitions. She still loves to exploit the properties of the beautiful medium of glass, but now prefers to focus on her own work and not necessarily be drawn by the constraints of commissions.

She has had great success in the Stevens Competition, winning the prize for Best Presentation in 2005, before going on to win first prize in both 2007, for her design for an internal screen at Skinners Court, London, and 2010, for a window to enhance the Entrance to the Archives Centre at Churchill College, Cambridge.

Fabrizia is an enthusiastic proponent of the Stevens Competition and it is something that she encourages every student to enter. It provides students with the opportunity to experience a real-life exercise in interpreting a client’s brief and creating a design that is sympathetic to the space in which it will be located and then to present it to the client in a compelling way. Whether they are a winner or not, she would also encourage everyone to attend the seminar at Glaziers’ Hall. Listening to the Judges’ feedback on individual entries and seeing how different people have produced different interpretations against the same brief, is an educational revelation and something that cannot be replicated in any academic environment.

Since winning the Stevens Competition, Fabrizia has developed her career and is now known for producing thought-provoking contemporary designs of architectural glass panels for both public and private locations. Her designs are inspired by many things and often include sculptural or theatrical elements. Above all, each piece is absolutely unique.

Two recent works by Fabrizia are shown opposite

INSIDE OUT  “Or discendiam qua giù nel cieco mondo” (Let us descend into the blind world now (Dante Inferno IV, 13)).
These lines, while inspiring this work, also reflect the exceptional times in which we were living during the COVID-19 pandemic lockdown in 2020.
“E quindi uscimmo a riveder le stelle” And then we went out to look at the stars again (Dante Inferno XXXIV, 139).
This is a 3-Dimensional self-standing panel on reclaimed steel base made from acid-etched, painted, sandblasted and laser engraved flashed antique glass laminated to toughened glass substrate carrier.
Dimensions: 38cm x 144cm

ST BEDE’S Roman Catholic School, Blackburn.
St. Bede’s School commissioned a feature window, entrance screen and wall glass panels to enhance the Prayer Room at the new school in Blackburn.
My concept for the overall design was based on the theme of “light” and that the window should embody and reflect the school’s vision and values (Guide, Inspire, Succeed. Believe all things are possible) as well as recognising the life and work of St. Bede; the school’s patron Saint.