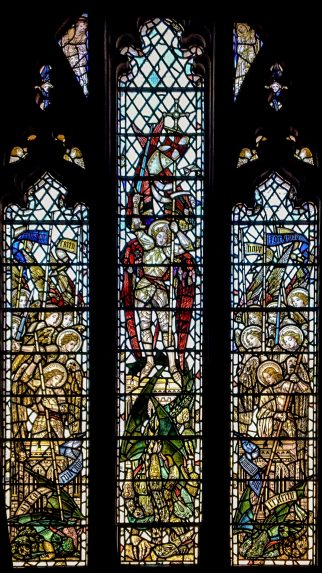 Morris Meredith Williams (1881-1973) studied at the Slade School of Fine Art in London and in Paris, where he met his first wife, the noted designer and sculptor Alice Meredith Williams (1877-1934), who had trained at Liverpool School of Architecture and Applied Art. After they married in 1906 they lived in Edinburgh where he taught and worked as an artist and illustrator. After the First World War Morris and Alice worked on many war memorials, notably the Scottish National War Memorial at Edinburgh Castle. During the 1920s, alone and with Morris, Alice designed stained glass windows and figures of saints and angels for the pulpits, altars, corbels and organ cases of more than a dozen churches in Britain, and aboard. The couple moved to Devon in 1929. After Alice’s death Morris remarried, but remained in Devon.