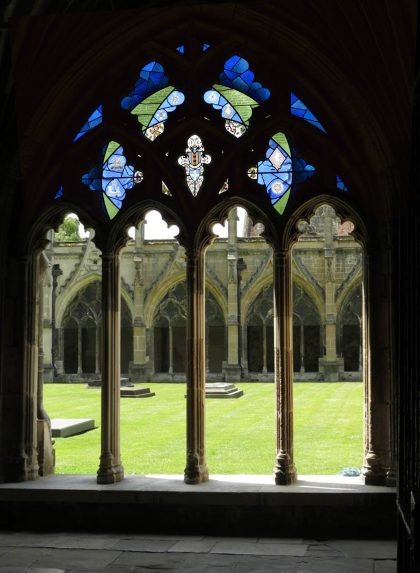 Alison Eaton ACR studied Architectural Glass Design (BA Hons) at the Institute of Art and Design, Wrexham. During her studies, she was awarded the first Worshipful Company of Glaziers Award for Excellence, 1995, which allowed her to gain valuable experience in a range of studios. Following this she was very fortunate to win the Stevens Competition Commission in 1997 for Beauchamp’s Restaurant, Leadenhall, London. (The restaurant has since closed and the location of the panels is unknown). After gaining her degree she joined The Cathedral Studios, Canterbury in 1998 as a Conservator, Glass Painter, Glazier and Designer. She is now a Senior Conservator and Assistant to the Head of the Studio.

During her time at the studio, she has developed her own style of designing, incorporating lettering, acid etching and experimenting with different paint applications whilst continuing to use the traditional leaded structural elements. Her Commissions are located in Canterbury Cathedral; the Catholic Church of St Edward the Confessor, Romford, Essex; St Bede’s Catholic Church, Newport Pagnell, Buckinghamshire and the Church of the Holy Trinity in Folkestone, Kent.

Her own stained glass is signed under her maiden name A J McCaffrey, whilst using her married name Alison Eaton for her Conservation work.