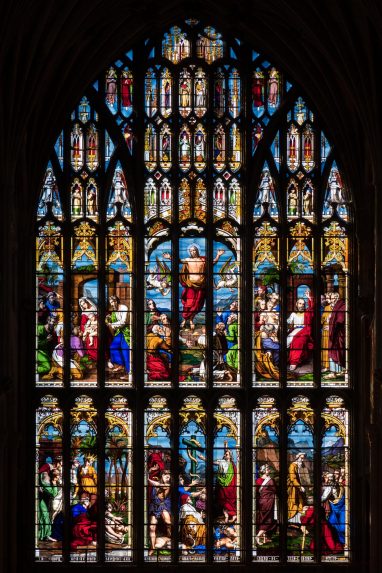 George Caleb Hedgeland (1825-98) was the son of John Pike Hedgeland, the architect and later stained glass artist, who worked on the restoration of the medieval windows at St Neot, Cornwall. Hedgeland was admitted to the Royal Academy as an artist in 1845 and probably learned the art of stained glass from his father. He achieved considerable success in the 1850s, exhibiting at the Great Exhibition of 1851 and rising to prominence as the designer of the Great West window at Norwich Cathedral (1853).

Unfortunately ill-health curtailed his career in England and he emigrated to Australia in 1859. There is no evidence that he worked again in stained glass. His short career and the change of taste in stained glass that took place in the latter part of the century, resulting in Hedgeland fading from view, but his talents and bold pictorial style deserve a wider recognition.