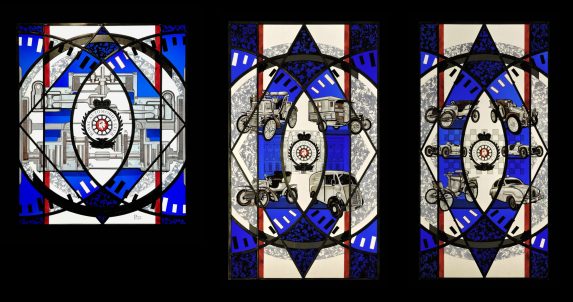 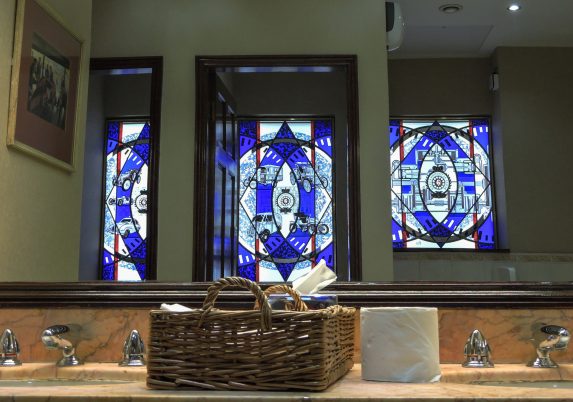 Anne-Catherine Perreau started her stained glass career, studying for a Diplôme Métier D’art (DMA Vitrail) from ENSAAMA Olivier de Serre in Paris in 2013, specialising in stained glass. After completing her diploma, she broadened her experience through a year of practical internships in several studios in France and England. Following this, she honed her painting skills by taking a one-year FCIL glass-painting course at Lucas de Nehou (Paris) in 2015.

After completing her training, she returned to England and for two years worked as an assistant glass-painter to Helen Whittaker at Barley Studio. During this time, she regularly participate in exhibitions and events, including the Stevens Competition, where her 2nd prize in 2016 was followed up by winning the Commission in 2017.

From 2017 to 2020, she worked as a freelance glass artist in England and continued to develop her own style and abilities in a range of techniques, especially around glass painting. She was honoured to receive the Arthur and Helen Davis Travelling Scholarship Award from the Glaziers Company in 2018/2019 to study carnation and sanguine pigment, and a paper on this topic will be presented in July 2022 at the CVMA Forum in Barcelona. For family reason she had to move back to France in 2021, and is now working as a glass painter and glazier at Atelier Simon Marq based in Reims.

Anne-Catherine says that “My professional career has always been motivated by a passion for the profession, but also by the desire to perpetuate know-how at its highest level and to preserve and restore works of art from the past.”

Anne-Catherine Perreau writes, “Glass is my passion, I fell in love with this material when I was a child and my fascination continues to grow. I use the power of light to create art through glass. I like to make contemporary creations using traditional stained-glass techniques.

For the Royal Automobile Club windows, the design captures the elegance, organization and impact of the Neoclassical style of the society headquarter’s architecture. Combining classical geometric influences with a contemporary artistic interpretation of motifs related to the club and its history, the windows harmonize within the building. The three windows are linked through the repetition of compositional elements, such as the club’s colours, used throughout, and the logo used as a central focus point.  However, each panel has its own unique theme and narrative symbolism.

In the first window, there is a map of a piston, used as an allegory for the important role of the RAC Club in the automobile world. The club’s history is represented in the second window, with the façade of the RAC’s Pall Mall building serving as a backdrop to iconic cars, each chosen to represent an important date or event. The final window illustrates  the legendary races organised by the club, represented by the pioneering or leading cars which excelled in them. I have also been inspired by motoring to give a dynamic feel to the composition. In summary the design reflects upon the history of the club and inspires the viewer to be part of the legacy.

To achieve the windows, float glass and acid-etched blue glass has been painted with four different grisaille pigments (black, brown, blue and blue grey) and leaded. A ruby enamel was used for the red details, and the colour intensified by a layer of stain. Areas were gilded with aluminium leaf to create the silver of the club’s colours, and to reflect the light.”