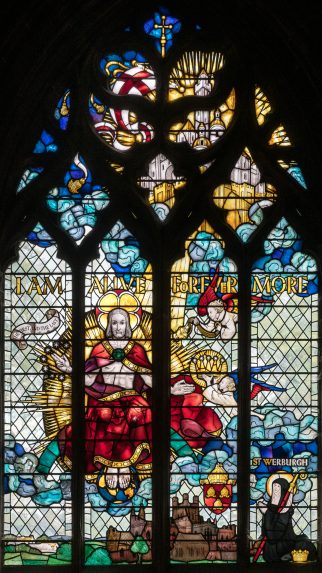 Harcourt Medhurst Doyle (1913–2001) was born and brought up in Liverpool, the city that would be home to his studio for many years, until retirement took him to Llandudno, north Wales, where he continued to work into his early eighties.

After study at Liverpool College of Art, Doyle won a scholarship to the Royal College of Art to study book illustration. While at the College the path of his career was transformed by a visit to the Victoria and Albert Museum where he discovered the stained glass gallery, and his fascination with refracted and transmitted light and bold colour was born.

His training at the RCA included instruction by Martin Travers and on graduation he joined Travers as an assistant for three years, before his career was interrupted by the Second World War. After the war and Travers untimely death in 1948, the Dean  of York Minster and noted stained glass enthusiast, Eris Milner-White, encouraged Doyle to return to the north-west and to establish his own studio, from which he would eventually produce over 100 windows. While most of his work is found in Lancashire and the north-east, there are examples further afield, including the Cathedral of the Holy Trinity, Gibraltar.

Harcourt Doyle and the Worshipful Company of Glaziers