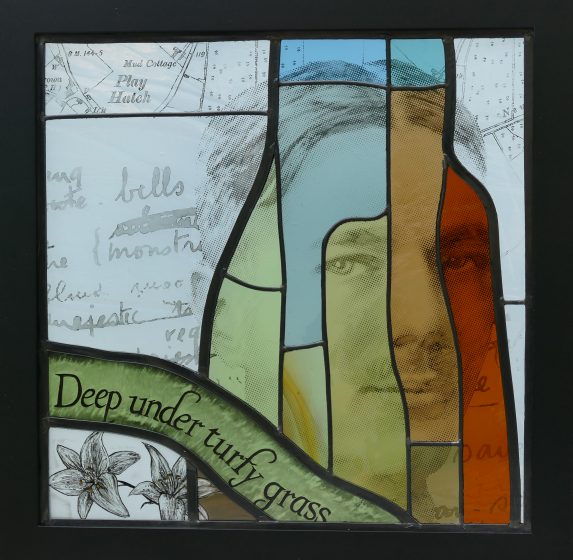 Caroline Small is the proud winner of two awards in the 2022 Stevens Competition.

In 2022 the Stevens Competition was run in association with the Dunsden Owen Association. The challenge presented to entrants was to design a window for All Saints Church in the village of Dunsden, Oxfordshire, to celebrate the period that the wartime poet Wilfred Owen spent in the village as a lay assistant to the vicar of the parish church. The period Owen spent in Dunsden had a profound effect on him and many commentators can see signs of the mature style of his poetry emerging during his time in the village.

The sample panel made to accompany her entry is shown opposite. The full design and Artistic Statement is here.

Caroline Small makes images in glass inspired by the patterns in found in nature, and structures that occur naturally.  She originally trained as a scientist, which highlighted how numbers are present in many natural settings, from sunflowers and crystals, to shells and succulent plants.  She adds “I find the mathematical sequence of numbers pleasing and science creates amazing and beautiful structures. I use this as the inspiration for my work.”

Caroline Small began her career as a scientist at Imperial College, London.  Her PhD is in neuro biochemistry and she spent 15 years as an academic investigating how the brain controls appetite and body weight.  In 2014 she was diagnosed with a rare and aggressive form of cancer and following the completion of her treatment in 2015 she decided to follow her passion for glass and refocused her career.

She learnt the art of stained glass initially through adult education classes in Guildford and subsequently by being mentored by other generous stained-glass artists in Surrey.  “Winning the Stevens competition has been an honour and I am delighted to have also won the craftsmanship award.  Someone said to me during the dark days of my treatment that I would do something amazing at the end – this has been an interesting journey and winning this year was simply amazing.”

Read more about Caroline Small on her website: Bombina Glass