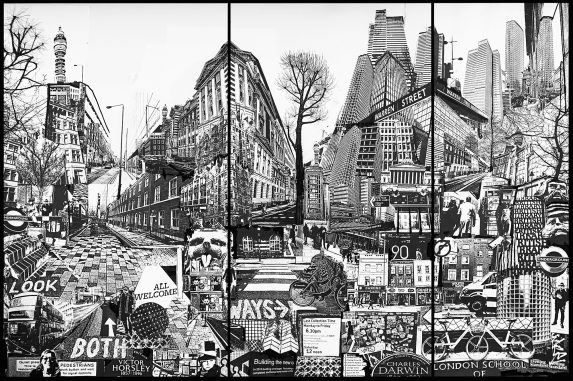 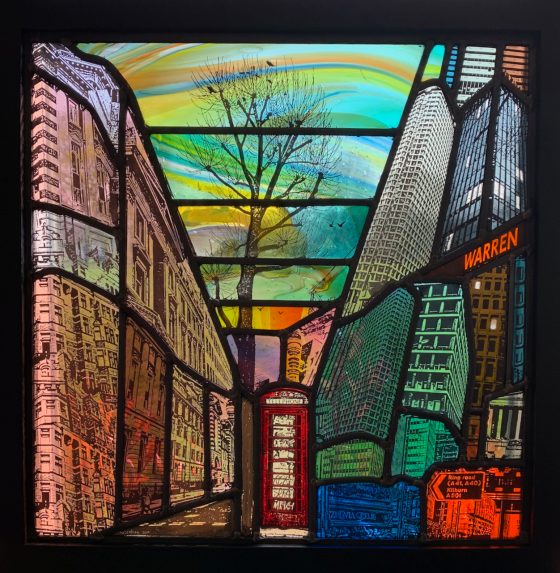 James Cockerill  has had a lifelong interest in photography and collage and graduated in Fine Art (sculpture) in 1995. He has a special interest in architecture, people’s response to their built environment and how art can play a part in that.

He founded HALTglass and has recently focused on making photomontages using silkscreen and sandblasting techniques with antique glass and traditional stained glass paints.

James Cockerill’s interest were reflected in his entry for the 2019 Stevens Competition. The challenge was to design a back lit panel for the patient waiting area of the Proton Beam Therapy Unit at University College London Hospitals Trust.

James’ whole design and the sample panel entered into the competition are shown opposite.

Made from over 400 iPhone photos taken in a walk spiralling out from the hospital site, it captures the environment  patients, staff and visitors pass through on their way to the hospital. Representing what may have been missed 4 floors down in the hospital waiting room.

The ‘Inside Outside’ panel was designed to change its illumination level from 80% – 100% – 80% and repeat. This would be just perceptible and is  designed so the viewer subconsciously takes on a similar rhythm in their breathing while looking at the panel. This idea comes from the power of breathing exercises as a way to bring calm in stressful situations.

The design won both the Brian Thomas Memorial Prize and the Evelyn Gee prize for craftsmanship.