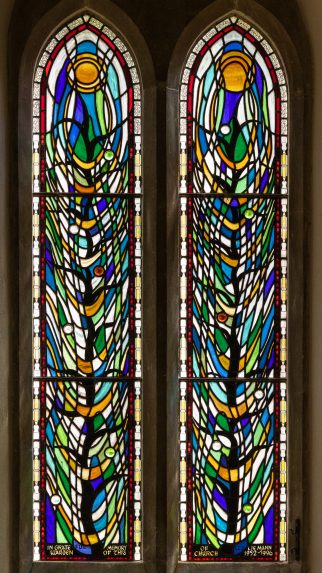 Peter Berry studied Architectural Stained Glass at Swansea College of Art. While at the College he entered the Stevens Competition, winning a prize in 1988. After leaving Swansea he established his first studio in the beautiful Wiltshire countryside in 1990.

He has spent the subsequent years completing many commissions for ecclesiastical, public and domestic buildings as well as much repair and restoration.

His designs are often created using photography and collage, before being  translated into contemporary works of art with the use of traditional techniques and methods.

A couple of examples of his work are shown opposite. Both are in the Church of St Giles, Stanton St Quintin, Wiltshire.

Peter Berry and The Worshipful Company of Glaziers


The Worshipful Company of Glaziers was founded in 1328 and remains dedicated to the art and craft of stained glass. In recent times the emphasis has moved from the protection of the personal economic welfare of Glaziers to the preservation of the heritage of stained glass and the support of continuing high standards.

Peter Berry won a prize in the Stevens Competition in 1988.