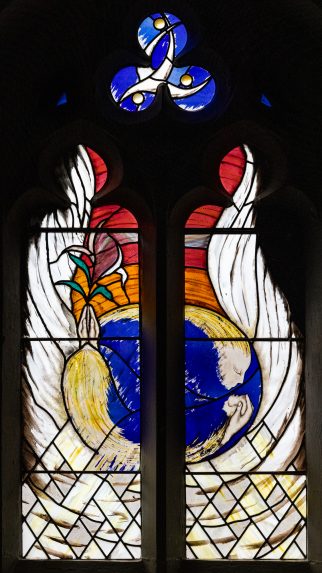 Catrin Jones (b. 1960) was born in Cardigan. With her natural aptitude for drawing  she enrolled on the foundation course at Swansea School of Art in 1979, and there became attracted to glass as an artistic medium. In 1980, she commenced the Swansea course in Architectural Stained Glass.

Encouragement, in the form of tangible success, came quickly. In her first year, she won the first prize for glass at the National Eisteddfod of Wales, a feat she was to repeat in 1982.

Between times, she took first prize in the national Hetley-Hartley Wood glass competition for a panel that was subsequently exhibited at the stained glass museum at Ely Cathedral, and purchased by the Victoria and Albert Museum.

On graduating, with distinction, in 1982 she, together with four other ex-students, established Glasslight Studios, a co-operative stained glass studio in Swansea, where patronage from the Catholic Church spawned a variety of ecclesiastical commissions. However, she became increasingly dissatisfied with the economic necessity of accepting uninspiring commissions and left to pursue an independent career in 1987.

Since then, Catrin has worked uninterruptedly on numerous commissions in a wide variety of business sectors, mainly in the public domain, along with occasional teaching both in London and Wales.