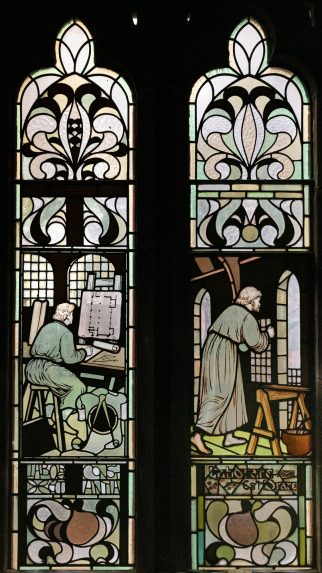 Oscar Patterson (1863 – 1934) was born in Glasgow, where he established his studio in 1889. A deep knowledge of glassmaking and a willingness to experiment helped him to build a reputation and standing that, at the time, eclipsed many larger local rivals. While many of his windows use strong colours, he also worked with the minimal use of paint, which allowed the lead lines to dominate. His most significant commission after World War One was for a complete scheme of stained glass for St Magnus Cathedral. The studio closed in 1931.

Significant amongst Paterson’s colleagues were Harry Thomson, with whom Paterson formed the Glass Stainers Company in 1893, and John Stark Melville, his longest serving assistant, who later emigrated to America, where he joined Tiffany & Co in 1913.

The image opposite shows two of three windows by Oscar Paterson, that were rescued from the Church of St Bride in Rosevale Street, Partick, prior to its demolition, and placed in the vestry of Hyndland Parish Church. In 1988 Paul Lucky was asked to create a fourth window in the same idiom, that can be seen on his Artist’s page. The Latin inscriptions at the base are Labore et Constantia – Work and constancy and Laborare est Orare –To work is to pray.