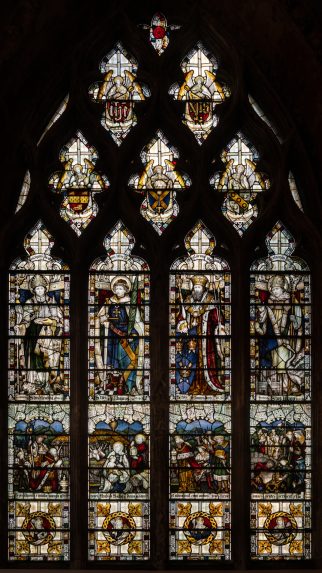 Herbert William Bryans was born in Tarvin, Cheshire on 14th January 1856. Five family members including his father and brother were vicars and his maternal grandfather was John Lonsdale, Bishop of Lichfield.

Bryans was educated at Haileybury and Pembroke College, Cambridge, and spent 10 years with his brother as a tea-planter in India and a further two years making wine in France before becoming a stained glass artist.

In 1890, soon after his return to England, he married Louisa, the fourth daughter of the Revd. Richard Richardson, and niece to Lady Grimthorpe.

It is thought that Bryans trained with Clayton & Bell before moving to Charles Eamer Kempe’s Studio in 1889 where he subsequently became the assistant to John Carter, the chief designer. Family connection was evident in 1895 when he designed a large four-light window for the Lady Chapel of St Albans Cathedral to celebrate the golden wedding anniversary of Lord and Lady Grimthorpe.

In 1897 Bryans left the Kempe Studio, with Kempe’s agreement and assistance, to set up his own studio at 38 Chester Terrace, Regents Park in London. As the company grew Bryans re located to larger premises at 12 Mornington Crescent, London. It was not surprising that Bryans windows closely echoed Kempe’s style but with his own unique artistic variations. Bryans Studio used a black, heraldic like dog as their logo, which was often located in the bottom right hand light in a small box that contained the window’s dedication.

Bryans team included, John Wimbolt, Chief Glass Painter and Earnest Heasman, also a Kempe alumni, who became Chief Designer in 1902. Another Kempe alumni, Geoffrey Fuller Webb, was a close friend and they occasionally worked together as Bryans and Webb.

As at St Albans Cathedral, it is thought that many of his stained glass commissions were obtained  through social and ecclesiastical connections. Major commissions include windows at Litchfield Cathedral, St Nicholas Cathedral, Newcastle & Worcester Cathedral, and although no records have survived, the location of over 300 other windows have so far been identified.