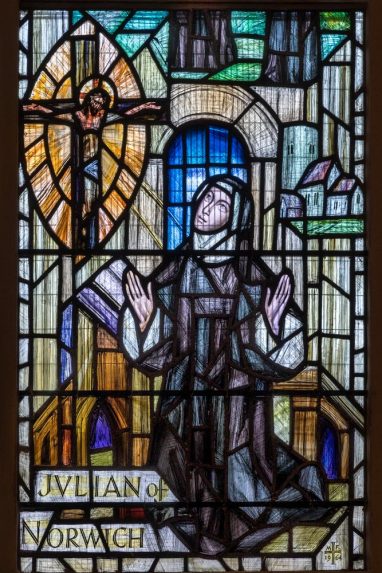 Moira Forsyth (1906-91) was the daughter of the ceramic and stained glass designer Gordon Forsyth. She studied at Burslem School of Art and at the RCA from 1926, where one of her teachers was Martin Travers. Her first commission was for the rose window at Guildford Cathedral. Her Benedictine window at Norwich Cathedral was one of her favourites because she said it reflected her belief in the importance of leading as part of the overall design as well as her love of lettering. For the last fifteen years of her life she lived in Farnham and worshipped at the local Catholic church, for which she also completed a complete scheme of 14 windows.

Sources:
Moira Forsyth on Wikipedia
And then the heaven espy: The windows of Norwich Cathedral by Dr Gudrun Warren (The Fitzwalter Press, 2017)