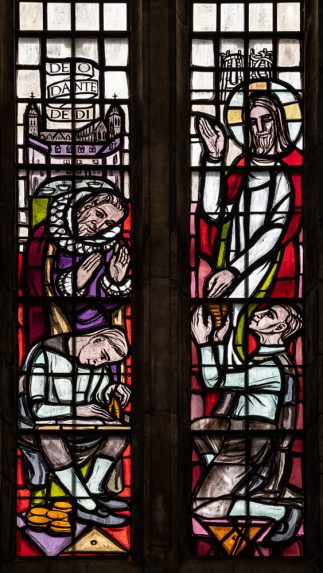 Rosemary Rutherford (1912-72) trained at the Slade School of Art and worked with the V.A.D. (Voluntary Aid Detachment) during the war, while also completing in 1941 a fresco at St Mary with St Leonard, Broomfield, Essex, her father’s parish.  After the war Rutherford was encouraged to consider stained glass and spent a year with the A K Nicholson Studio, before working as an independent artists. Her first major commission was for St Mary with St Leonard, Broomfield, while her major achievement in the 1950s was the Charterhouse window of 1955 at Guildford Cathedral. The direction of her art changed after a holiday in Brittany in 1960, when she was introduced to dalle de verre, and she became one of its earliest British exponents, while still working with traditionally leaded glass.

Source: Notes prepared by A Haward.